By Greg February 27, 2021
This past fall I purchased a fatbike. It was a bit of a commitment for me, as I'm one of those people that really struggled to understand what the big deal was with biking in the winter. Typically winter for me is a time to do all of the things you can't do during the warmer months... ski, snowshoe, ice climb, etc... And, fatbikes themselves just seemed like heavy, slow, cold, and less exciting versions of riding in the summer.
That said, with the pandemic not going anywhere anytime soon I needed an activity that was convenient to do from home. Bikepacking had really opened up some opportunities during the summer, and there were a few conveniently located fatbike trail systems nearby, so after much deliberation I pulled the trigger and added a fatty to my stable.

While I've really been enjoying winter trail riding a lot more than I thought I would, my primary reason for getting a fatbike was so I could continue getting out for short overnights. Since the beginning of January I've been fortunate enough to get out for a number of short overnighters. Most of these trips were to a top secret location along Lake Champlain not too far away from my home in Burlington. But my last trip was to Law Island, a place with legit campsites, so I thought I'd share.

The route is ~30 miles roundtrip from the south end of Burlington, and links up portions of the Burlington Wildways and the Island Line Trail for a trip that mostly avoids roads.

You can view route info HERE. 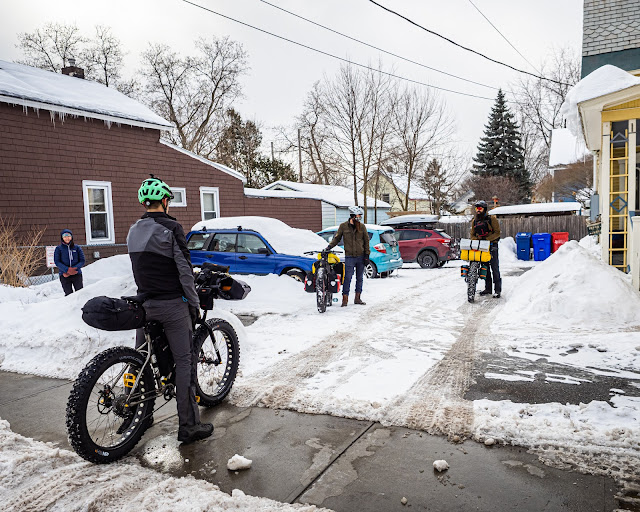 On my other trips I've often gone solo, or with one other friend. For this trip three awesome friends joined me for a little snack-sized, backyard adventure. 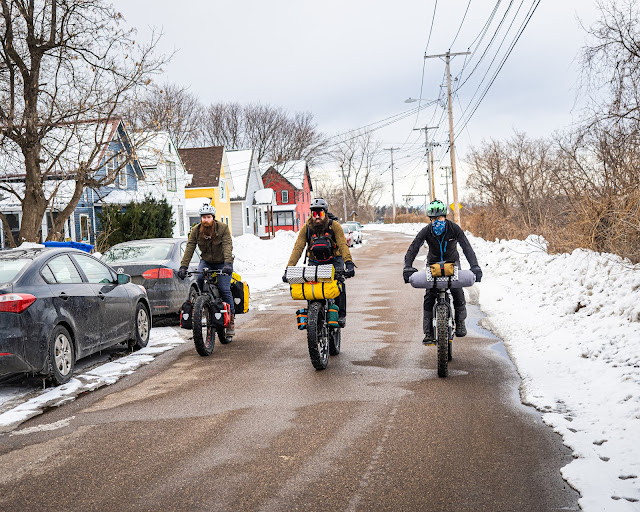 We were all able to depart directly from home. We met up in Burlington's Old North End, then followed side streets and backroads until we were able to get off the pavement at the Intervale Center. 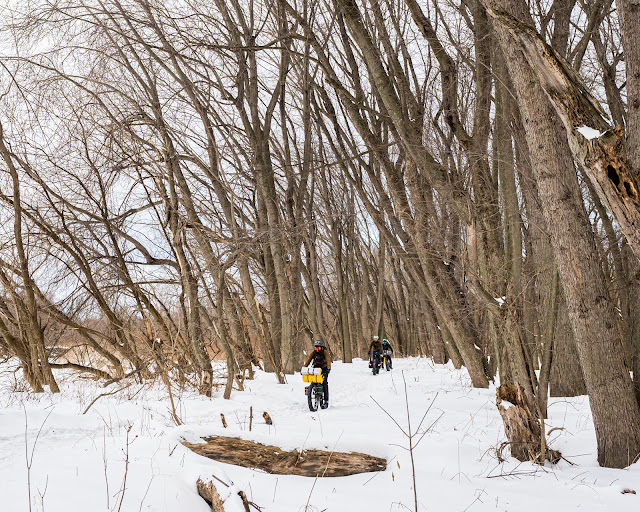 Once off the roads we enjoyed fairly well traveled trails and views of the Winooski River. 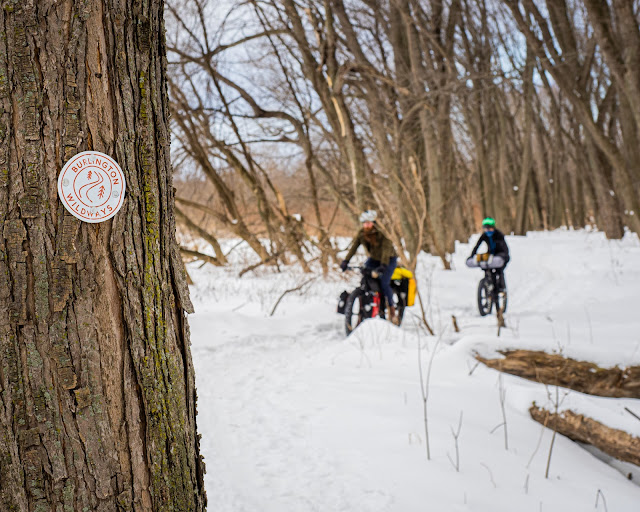 The Burlington Wildways is a multi-organization partnership working to protect and connect Burlington's natural areas, and the resulting trails allowed us to create a route this was over 75% off road. 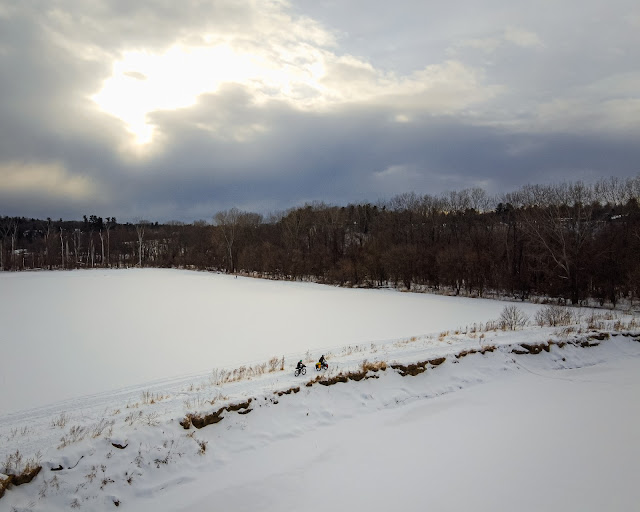 Here John and Rob make their way through the Intervale headed toward the Ethan Allen Homestead. 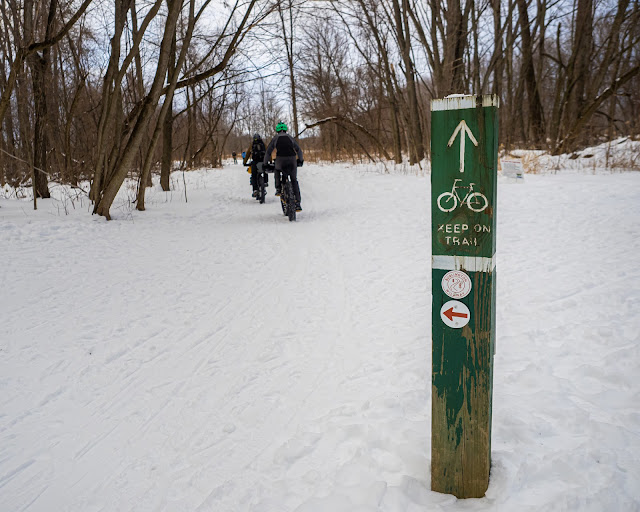 All of the trails are very well marked and easy to navigate. While I wish there were even more trails within the city limits, what we do have is pretty awesome! 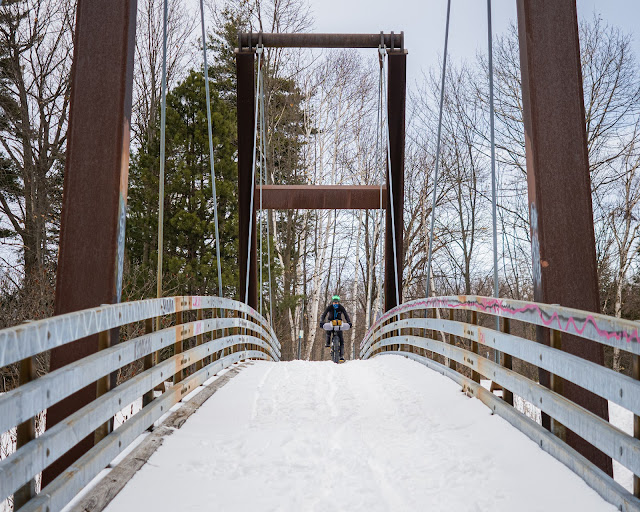 Here Rob is seen crossing over RT127 on our way to Ethan Allen Park. After riding through the park we had a short hop onto the roads before getting on the Burlington Bike Path/Island Line Trail. 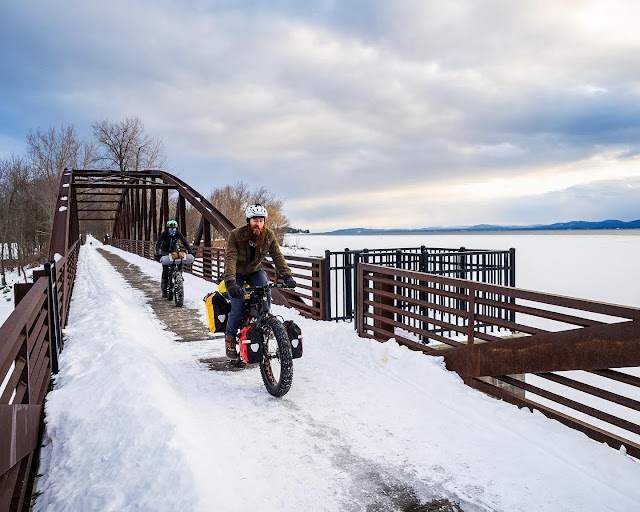 Rob and John crossing over the mouth of the Winooski River with Lake Champlain and the Adirondacks in the distance. After getting on the bike path we had ~5.5 easy miles on packed snow to our campsite for the night. 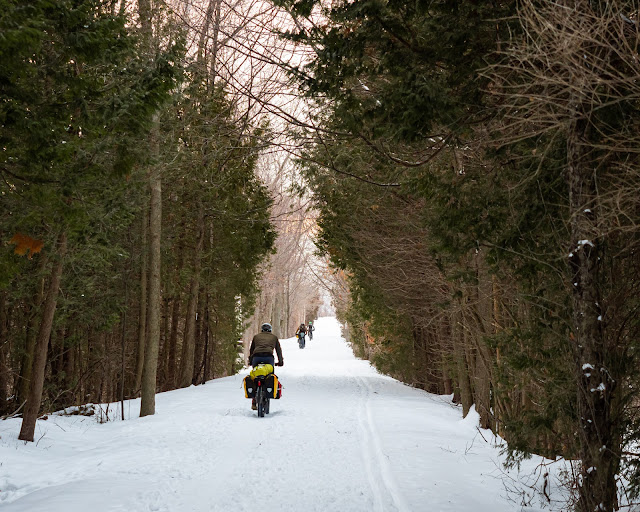 There was one more short section of road left near Airport Park in Colchester, VT. But once off the road we were just a short way from our final destination. Here you can see John, Brennan, and Rob riding down the last bit of trail leading out onto the Colchester Causeway. 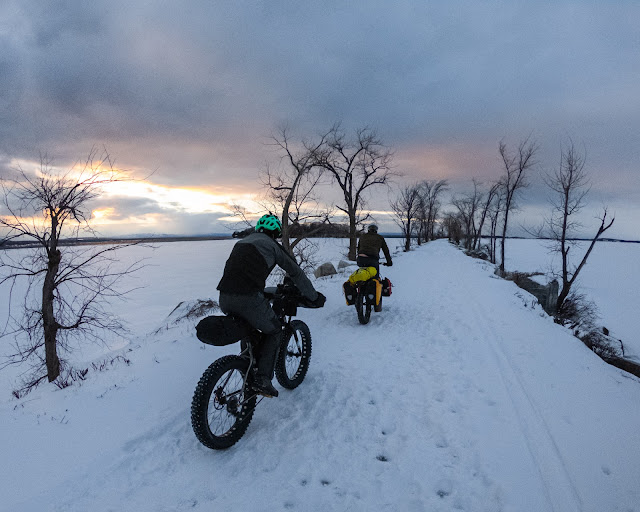 The causeway is a pretty awesome section of trail that runs straight out into the lake. In this picture you can see Rob and John on the causeway with Lake Champlain on the left, and Mallets Bay on the right. In the summer Local Motion runs a bike ferry across the small gap in the causeway that allows boats to pass through. 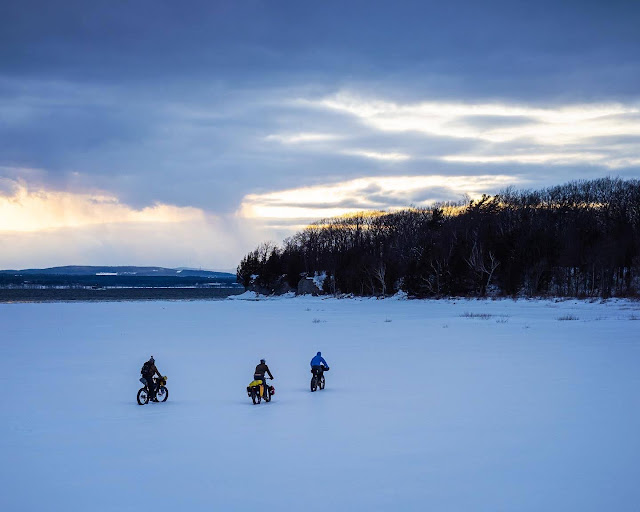 No need for a ferry during winter when the lake is frozen. Here Rob, Brennan, and John make their way across a frozen Lake Champlain towards Law Island.
Anytime you head out onto frozen water caution is required. Before this trip we had been tracking the ice conditions in the area all season, and had visited the area in-person to evaluate conditions prior to departing. 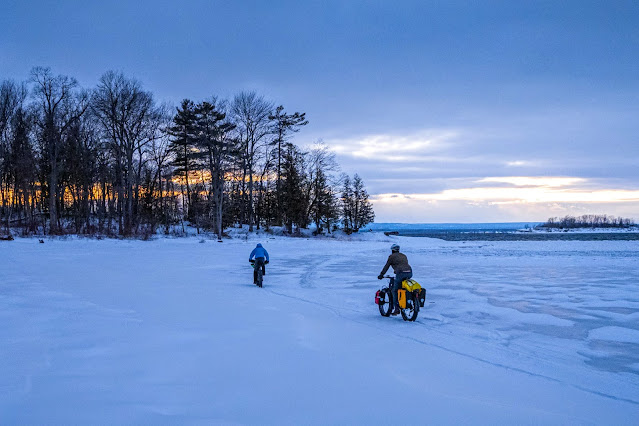 Rob and John making their way to the northwest part of Law Island. In was on this side that we found the easiest access. Parts of the shore are lined with cliffs, or are quite steep. 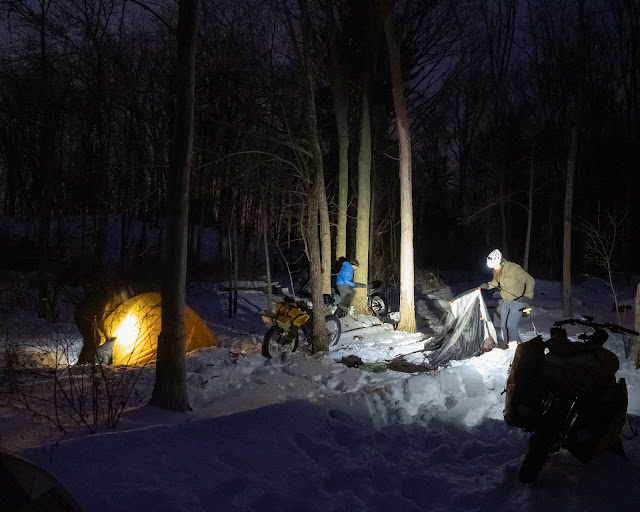 After figuring out how to get onto the island, we found a place to camp and got settled in. 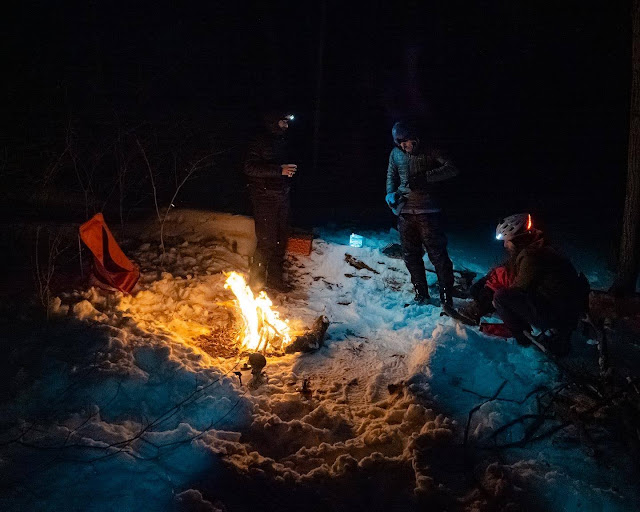 Winter nights in Vermont can be long and cold. A fire is almost a necessity, and it provided the perfect place to hang out and catch up with everyone. 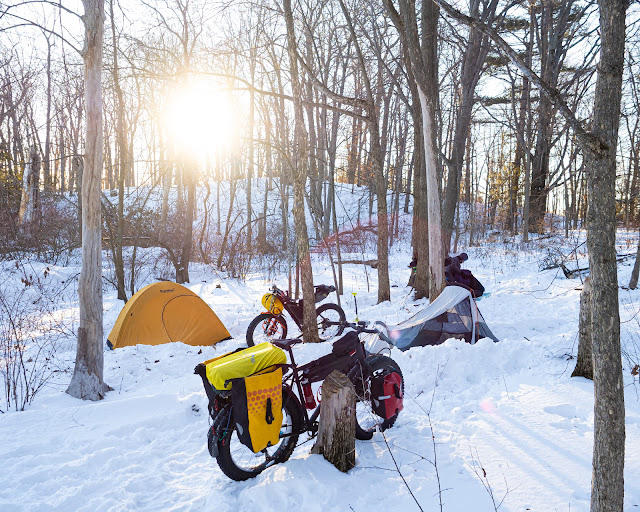 The next day we were greeted with a beautiful day! After making sure everyone survived the night, we had some breakfast and packed up. Before leaving we explored the island a bit and found a number of other really cool campsites. 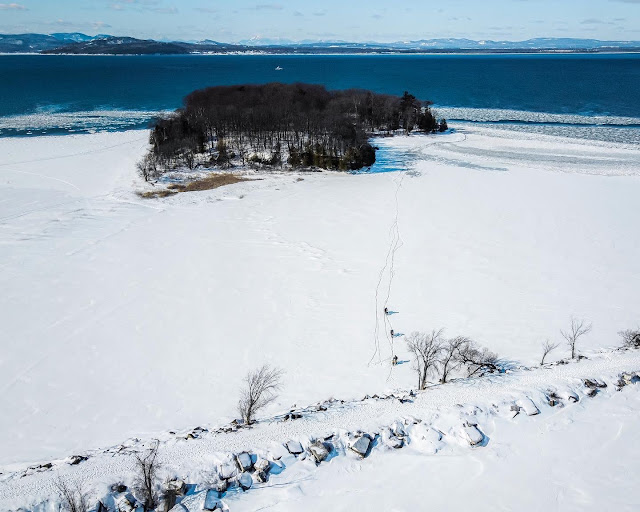 Everyone crossing back over to the Colchester Causeway with Law Island and Lake Champlain in the background. One of the more challenging parts of the trip was hauling our loaded bikes up and down the rocky edges of the causeway. 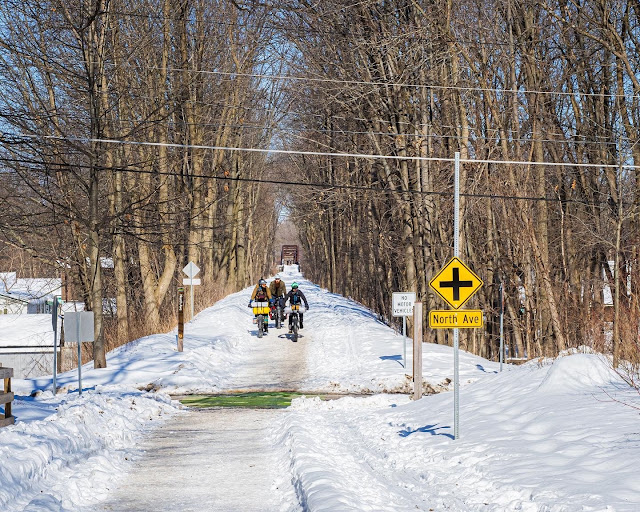 I had a family to get back to and the others had places to be, so we took the direct route on the bike path back to Burlington. 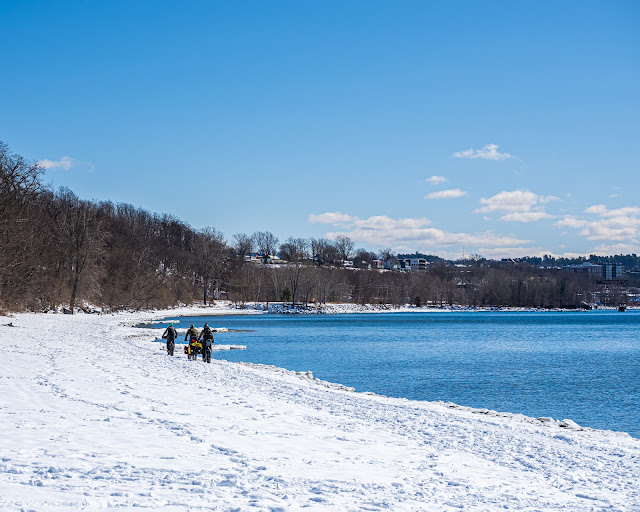 Once we reached North Beach we couldn't resist jumping off the bike path and riding the last little bit back to town along the water. Here you can see Rob, Brennan, and John riding along Lake Champlain with downtown Burlington in the background.